In over four decades I've never had a horse founder. I've seen a few over the years, but have never had to deal with a case of my own. I have had two mild incidences of farrier induced laminitis, but both were resolved quickly with ice soaks & anti-inflammatories (& changing farriers!). Unfortunately this week I joined the ranks of those who have dealt with equine founder, a devastating, often times fatal disease of the hooves. As I journey into the dark depths of founder, I can only hope that what I learn will one day prevent another horse from suffering. And if it doesn't prevent the onset of founder, then at least let me know enough to save the next horse.

cmkdreams
I grew up in S CA, graduated from La Quinta High School & got an AA degree from Orange Coast College. Living in a housing tract meant my horse was stabled so I could have no more than 1 at any given time. Over 20 years ago I moved to N CA, bought property & my numbers have increased significantly. My passion for horses is only limited by my checkbook & sometimes it can't even limit me. :) 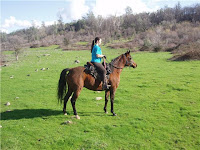 I've had a few wonderful emails recently from Maark's owner. She tells me that Maark is doing fantastic. It's so wonderful to hear that this very nice horse is being given the opportunity to be all he can be by a wonderful horseperson. The following are the emails updating me about Maark:

We are a grooving down the trail!!!! Did a ride at Whiskeytown 15 miles very hilly and

rocky/tough ride. He did fantastic only 2 things he didn't like out of that whole ride a bicycle and a dark mud sucky puddle. Not bad I thought. W rode with me on my other guy. C H thought I was nuts as she rode with me too but after wards thought he was a great horse for only going out on the trail the 3 time now. Having fun with him. Husband may start riding him after about 20 rides or so he is a great big boy! He is looking really good will get pictures when his hair is off so you can see what he really looks like. Had his teeth floated/sheath cleaned a couple days ago he did really good with that too. He is coming around to others too, he is fearful of new people at first, taking him to a class at Shasta college to get him used to going places in the trailer etc and doing very well. Anyway will quit talking your ear off. Will have to ride soon too at Oroville or Tevis trail. Really want to do the latter!!!
Here are some pics of Maarks ride on Tues 3/16. He did so good! Very brave, most of the time. Easy to work through things though. White rocks are a little disturbing. Had a great day and got a little burnt.

Hey CMK, We are off to our first ride at Cache Creek today and just wanted to send you a couple of cool training pics of him doing so good! He is such an awesome horse, brave and trusting what a gem!
Who would have thought that morbidly obese gelding who got off the trailer last Sept would turn into this awesome trail horse? He's come such a long way thanks to the people in his life who were willing to give him a chance. There IS life after obesity! Ride on Maark & Mom.
Posted by cmkdreams at 6:36 PM No comments: